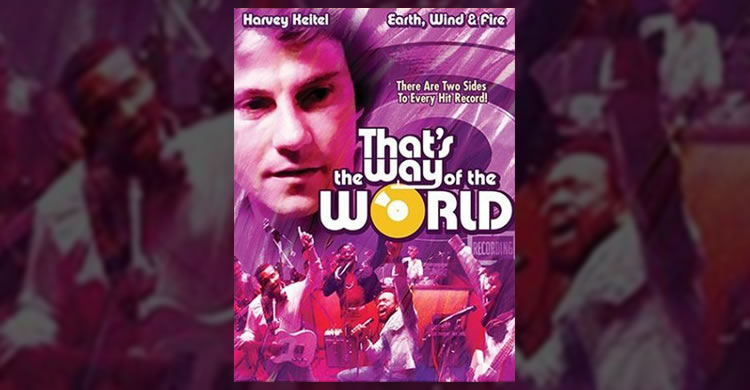 Here’s Earth, Wind & Fire performing “Happy Feelin’” during the roller skating rink scene from the 1975 movie, That’s The Way Of The World.

Maurice:
I got a phone call from Sig Shore. Sig wanted Earth, Wind & Fire to do the sound track to a movie he was producing and directing, That’s The Way Of The World. He had just scored a huge hit as a producer with Super Fly.

That’s The Way Of The World, the film, would be an often-told story of corruption in the record business. They wanted us to act in the film as a group simply called “the Group.” The plot was that the Group would be upset because they were continually pushed to the back burner of the recording schedule.

In pulling together the sound track, my first call was to Charles Stepney, who ended up having several cameos in the film.

That’s The Way Of The World would not be a sound track in the traditional sense. I made sure the EW&F concept would be reflected in the score, which meant no departures from our established themes.

Charles said that if I was going to do a score for a film, it should sound like a score – with a full orchestra on as many songs as possible. That’s The Way Of The World was the beginning of our big horn-section sound. We also began to use a full string section from this album forward.

In between gigs and periodic stops in the studios to finish recording That’s The Way Of The World, we filmed the movie. I played a character named Early, a disgruntled bandleader. I only had a few other lines in the film. It was abundantly clear to me that I didn’t have any acting chops! The entire band looked pretty weird on-screen, though we tried to make it look as effortless as we could. I don’t think the script was that bright, either, in our defense.

The song “That’s The Way Of The World” started as a basic track given to me by Charles. His melancholy yet hopeful chord changes set the tone. Verdine and I wrote lyrics that spoke about staying true to yourself and remaining young at heart. The song was written as the movie’s main theme, but after the title, that’s where the association stops. Verdine and I didn’t pay any attention to the script, we just wrote what we felt. Johnny Graham’s simple, haunting, bluesy guitar solo was the unsung hero of the song.

It is truly the Creator’s gift when something comes just when it’s needed. Earth, Wind & Fire needed the song “That’s The Way Of The World.” And Americans needed to hear it. It is our national anthem because “to sing our message loud and clear” meant that Earth, Wind & Fire had, I believe, a divine assignment. We were telling the world’s people not to waver in their hope, not to waver in their heart’s desire, no matter how crazy and out of control the world seemed around them. The world will tell you that nothing ever changes, that you’re a fool to have hope – but it’s each human being’s divine right to hold on to hope and faith. I believe this was the ultimate message the band was created to give.

Columbia Records was not so pleased when I refused to have the words “The Original Motion Picture Soundtrack” included boldly on the front cover of the album, as was the standard practice. It was an accepted marketing belief that this prominent banner helped album sales. This may have been true, but I didn’t give a damn. I wanted the album to stand alone as an EW&F album, and stand at a distance from the movie.

My instincts were spot-on. Verdine and I went to a screening of the movie. I was devastated. We looked like clowns – like idiots. Uncharacteristically, I panicked. Sh**, Charles was right – this was going to ruin the album! The movie was going to kill all the work we had done.

I put it in God’s hands. I called on him and waited. His response was not unlike Mama’s prevailing mantra – just keep moving forward. I did.

We were the first black act to top the Billboard pop single and album chart simultaneously, on May 24, 1975. That’s The Way Of The World would quickly sell almost two million copies.